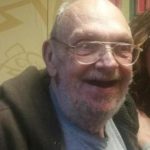 William George Von Wald, 77, passed away on Thursday, May 16, 2019. William was a native of Kenosha, Wisconsin and a peninsula resident since 1960. He went to work at NASA in the Apprentice Program and retired in 1990 after working on the Viking project and many other projects as a Mechanical Engineer. He enjoyed fishing and especially hunting for deer in the mountains. He also enjoyed going to auctions and helping with estate sales after his retirement.
He was a preceded in death by his wife of 29 years, Barbara Ann Von Wald and is survived by his children, Russell W. Von Wald of King and Queen, Douglas R. Von Wald of Currituck, Linda C. Chaffee (Troy) of Yorktown, Richard H. Clark, Jr. (Carolyn) of Newport News, Glenna C. Carroll (Joe) of Newport News, six grandchildren, Glenn, Rachel, Samantha, Ian, Tori and Tristan as well as seven great grandchildren Greyson, Christian, Delany, Sophie, Madelyn, Ella and Victoria.
A memorial service will be held at 6:00 PM on Wednesday, May 22, 2019 in Amory Funeral Home Chapel. The family will receive friends following the service.