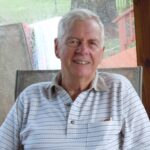 Yorktown, Va. – Tommy Curtis Steele, 85, passed away on Saturday, December 25, 2021. Tommy was a native of Kentucky and a Yorktown resident for 55 years. He retired from NASA after 38 years of service.
He is survived by his wife of 63 years, Shirley Sharpe Steele; a son, Jeffrey Curtis Steele (Patricia); a daughter, Vicki Steele Gaydos (former son-in-law, Michael); a sister, Carolyn Segrist (Edward); and grandchildren, William and Samuel Steele and Katherine Gaydos. He was preceded in death by his father and mother, William and Martha Steele; and his brother, Howard Steele.
A service to be held at a later date when determined will be posted at amoryfuneralhome.com