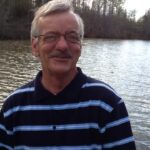 Gloucester Point, Va. – Stanley Lee West Jr, 64, passed away on Tuesday, October 11, 2022. Stanley was a native and lifelong resident of Gloucester. He graduated from Gloucester High School, worked as an auto mechanic for Bill Fary Ford, and did state inspections for many years. He was also a board member of Hope Church Newport News. Stanley enjoyed hunting, fishing, hiking, camping, and most everything that was outdoors.
He is survived by his wife Debra West and stepsons Russ Harper and his wife Saffi of Newport News, David Harper and his wife Ashley of South Carolina, Eddie Harper III of Georgia, and a stepdaughter Renee Hall and her husband Wade of Georgia; a sister Frances Belvin and her husband Edward of Hayes, one niece Crystal Sawyer and her family, and ten grandchildren, Dominique, Debra, Elizabeth, Elise, Cherise, Amelia, Natalie, Noah, Reese and Addison. He was preceded in death by his parents, Stanley Lee West, Sr. and Myrtle Walker West, and a sister Betty Belvin.
A memorial service will be held on Sunday, October 23rd at 3:00 PM at Hope Church, 4 Elmhurst Street Newport News Va. 23603. Arrangements by Amory Funeral Home, Grafton, Va.
In lieu of flowers, the family would like to donate funeral funds to Hope Church Newport News at www.faithlife.com/hcva/give