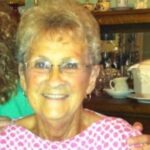 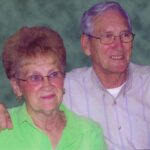 Yorktown, Va. – Shirley Ann Wilson, 89, passed away on Friday April 2, 2021. Shirley was born in Norfolk and raised in Hampton. She graduated from Hampton High School in 1948. She worked long side her late husband Clyde at Wilson Union 76 service station in Newport News and was a member of the Yorktown Battlefield Babies Chapter of the Red Haters and Alpha Omicron Master Chapter of the Beta Sigma Phi. She was also a value member and supporter of the Junie Dunlevay NASCAR race team and was an avid bowler for over fifty years with the same team.
She was preceded in death by her husband Clyde F. Wilson, Sr. and her grandsons, Ben and Blake Wilson, her parents Barnie J. Nixon, Jr. and Nannie Lintz Nixon and brothers, Barnie (Buddy) Nixon, JR. and William Nixon and a sister Nancy E. Burns. She is survived by her son, Clyde F. Wilson, Jr. (Deana), Dale E. Wilson (Kim) and Keith W. Wilson, her sisters, Frances Jean Wright and Nan Patterson; 6 grandchildren and 9 great Grandchildren.
A graveside service will be held at 11:00 AM on Tuesday, April 6, 2021 in Parklawn Memorial Park. You may stop by the Amory Funeral Home between the hours of 4:00pm to 6:00 pm on Monday April 5, 2021.Memorials maybe made to the Victory Junction, 4500 Adam’s Way, Randleman, NC 27317 A reception will follow the service at 1000 Old York Hampton Hwy, Yorktown,Va