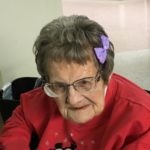 Ruth May (Garland) Duley, 101, passed away on Sunday, June 2, 2019. She was born in 1917 in Greenfield, Massachusetts to the late Florence E. and Howard M. Garland. Her father was an engineer for the B&M railroad, so they moved often. She spent her formative years in Bellows Falls, Vermont and later moved to Massachusetts where she worked at the naval Shipyard and Raytheon. She also did volunteer work during WWII.
She married H Ray Duley on December 31, 1942 at the West Somerville Baptist Church. He was a career Navy man and they moved several times during his career. They made many lifetime friends along the way. Ruth was a very gifted crafter and enjoyed sharing and teaching her talent to others. She was active with the York County Homemakers Club for many years and volunteered for the Disabled Veterans of America making crocheted capes and lap quilts for our veterans. She enjoyed attending various activities at the York County Senior Center. She was a member of the York County Chapter110 Order of the Eastern Star for over 60 years. She belonged to the Patty Olsen Circle at Crooks Memorial United Methodist Church, the LAFRA #172 of Yorktown and Retired Senior Volunteer Program.
She is survived by her loving husband of 76 years, H. Ray Duley; two daughters, Mrs. Nancy J Hawkins of Yorktown and Mrs. Barbara J Richards of Selah, WA; 4 grandchildren, David Brian Hawkins, Charles Ray Richards, Christina Marie Swindler and Cheryl Rae Boehm 7 great-grandchildren Zadie Joy, Kevin Russell, Daniel Robert, Dylan Ray, Billy III, Autumn Shane and Andi Sheyanne and two great-great-grandsons William IV and Cooper.
A funeral service will be held at 1:00 pm on Saturday, June 8, 2019 at Crooks Memorial United Methodist Church with Rev. Lisa Barbery officiating. An Eastern Star Service will be held at 7:00 pm on Friday, June 7, at Amory Funeral Home, Grafton. The family will receive friends from 6-8 pm on Friday, at the funeral home. Interment will be held at 2:00 pm on Monday, June 10, at Albert G. Horton, Jr. Memorial Veterans Cemetery, Suffolk, VA.
Arrangements by Amory Funeral Home, Grafton, VA.