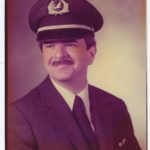 Williamsburg, Va. – Capt. Bob Richardson has flown West. Born on October 24, 1949 to Clyde and Annie Holt Richardson, he died unexpectedly on Monday, July 29, 2019. He was preceded in death by his parents, and is survived by Kay, his wife of 43 years, his son, Holt (Saya) and grandchildren, Allen and Hanna, step-son Michael Stines (Sharon) and grandchildren, Anna, Mackenzie, Aiden, Jared, Bailey and Zane; sisters, Mary Jane Dean, Patricia Compton and Margaret Dyer, and brother Clyde Richardson.
Growing up in Martinsville, VA he loved planes and flying from an early age. He pursued this passion throughout his life, beginning his airline career with Piedmont, flying the YS 11, and retired from U S Airways while flying the Air Bus A330. Honoring Bob’s request, there will be no formal funeral service. A celebration of life will be held on Saturday, August 3rd at 2:00 PM at Wareham’s Pond Community Center in Kingsmill, 175 Wareham’s Pond Road. In Lieu of Flowers, gifts may be made to Latisha’s House, P.O. Box 5817 Williamsburg, VA 23188, or to Avalon Center, P.O. Box 6805 Williamsburg, VA 23188. Arrangements by Amory Funeral Home, Grafton, VA