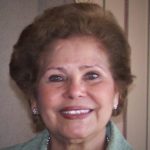 NEWPORT NEWS, VA – Obdulia F. Torres passed away peacefully at home on Saturday, June 22, 2019. She was born on February 2, 1933 in Naranjito, Puerto Rico, the youngest of 11 children. She met her future husband, Manuel Torres, when they were kids – he was 7 and she was 8. As a teenager, she moved with her sister to the city of Bayamon to work as a seamstress in a clothing factory. There she continued to see Manuel throughout the years, and they eventually married in 1956. Together, they travelled around the world as a military couple. With her determination and dedication, she took it upon herself to learn English. She had a passion for flowers, always surrounding her home with beauty wherever they were. Roses were her favorite.
Obdulia was a loving wife, mother, grandmother, great-grandmother, and friend. She was a kind and gentle person who loved her family dearly and cherished every moment with them, especially family gatherings. She would be there for you if you needed anything at any time – always with a great big hug. Her quick wit and sense of humor brought lots of smiles and laughter to everyone. She led by example, teaching her children to have faith, be kind, enjoy life, but most of all, to love unconditionally. She was a devout Catholic and member of the St. Jerome Catholic Church.
She was preceded in death by her husband, Manuel Torres, and her grandson, Jacob Nisbet. She is survived by her children Carmen Torres-Nisbet (Ed Nisbet); Victor Torres (Debbie Torres); Lina Kennedy; and Judy Purne (Mikael Purne); along with five grandchildren, Jonathan Nisbet, Eric Kennedy, Bryan Kennedy, Victoria Torres and Mikael Purne; seven great-grandchildren Paige, Emerson and August Nisbet; Liam and Halle Kennedy; Sophie Conn; and Oliver Kennedy.
The family would like to extend their sincere appreciation to her caregiver, Hope Delargy, and to the staff of Riverside Hospice. She is at peace and is probably dancing with Dad. We love and miss you. The family will receive friends from 10 to 11 a.m. Wednesday, July 3rd, at St. Jerome’s Church on 116 Denbigh Blvd. in Newport News, VA. A Catholic funeral mass will be held at 11am led by Father Patrick Baffour-Akoto and Deacon Eric Palm with a reception to follow. The interment will take place at Albert G. Horton Jr. Memorial Veterans Cemetery in Suffolk, VA. at 3pm. In lieu of flowers, donations can be made to the Riverside Hospice Foundation; 12420 Warwick Blvd. Suite 6E; Newport News, VA 23606.