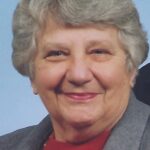 Yorktown, Va. – Mrs. Myrtle G. Soles, 88, of Seaford, passed away peacefully at home on Wednesday, May 13, 2020. Mrs. Soles was born in Wakefield, VA on December 17, 1931 to the late Junious Garland and Mary Goodrich. She was raised on her family farm, the oldest of 3 children. She attended Rocky Hock Methodist Church during those years and graduated from Wakefield High School in 1950. Myrtle attended Madison College (now JMU) and graduated in 1954 with a major in English and minor in history and French. She went on to earn her Masters degree in education with an advanced certificate in supervision from the college of William and Mary. She began her teaching career at York High School in 1954, the first year it was open. It was during that first year of teaching that one of her students would introduce her to his brother, Boyd (Teeny) Soles. After meeting him for the first time, she called her sister and told her that she had met the man she would marry. They went on to marry on December 27, 1955, and settled in Yorktown, VA where they raised their 3 children, Curtis, Cindy and Carl. In 1972, Mrs. Soles transferred to Tabb High School and continued teaching English and French. For 2 years she served as assistant principal at Tabb Middle School and then returned to Tabb High School as assistant principal. She would remain there until her retirement in 1991, with 32 years of service in the York County School System.
Mrs. Soles was very involved in her community and served on many committees and boards including the Retired Teachers of Delta Kappa Gamma, Seaford Woman’s Club, the York Foundation for Public Education and the York County Senior Center. She was a member of Crooks United Methodist Church where she taught Sunday School for 55 years.
Myrtle is predeceased by her parents, Mr. and Mrs. Garland Goodrich; her brother B. H. Goodrich and a brother-in-law Roy Massengill.
She is survived by her husband Boyd Soles; her children, Curtis (Melody), Cindy (John) and Carl (Holly); and 8 grandchildren, Ben (Lexi), Jarred (Erin), Justin, Jordan, Travis (Haley), Tyler, Andrew and Jeanna (Hutson) and 8 great grandchildren Tatiana, Emma, Sophie, Judah, Josiah, Blake, Rose and Olivia. She is also survived by her sister Leigh Massengill, her sister-in-law Laura Anne Goodrich, her brother-in-law Bobby Soles (Donna) and a host of other cousins, nieces and nephews.
The family would like to give a special thank you to her caregivers who provided exceptional care over the past few years as well as her beloved neighbors who were like her extended family.
Due to the current pandemic, all services will be private.
In lieu of flowers, the family requests considering a contribution to the Alzheimer’s Association, Southeastern Virginia Chapter, (www.alz.org) 6350 North Center Drive, Suite 102, Norfolk, VA, 23502.