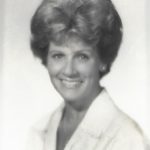 Mary Georgalas, 86, passed away on May 25, 2019 in the presence of loved ones while holding her daughter’s hand. Mary was born on December 23, 1932 in Newport News to Harry and Ourania Handges where she spent her days roller skating up and down Washington Avenue. She had since been a long-time resident of Seaford, Virginia, lovingly watching the sun rise and set over Cabin Creek with her devoted husband.
Mary wed her childhood sweetheart, A. Jack Georgalas, on Christmas Day, 1952. They were inseparable from the moment they met and shared a love greater than no other. Together, they raised their four children, Suzanne, Venisse, Jack, and Harry. They loved nothing more than being together, watching their seven grandchildren and ten great-grandchildren run and play.
Together, the Handges and Georgalas families founded Saints Constantine and Helen Greek Orthodox Church. Mary and Jack continued their families’ legacy by being active members and one of the largest contributors to their parish. Mary was also the co-founder of Tri-Cities Beverage which she and her husband established in 1959.
Mary was beautiful inside and out; the epitome of a lady. Her attention to detail came with ease in all she did. Her presence and personality always lit up a room. She exuded poise and grace, and was admired by all who were lucky enough to know her.
She is survived by her loving and devoted husband, A. Jack Georgalas; children, Venisse Georgalas and Jack Georgalas; son-in-laws, Mike Kokorelis and Richard Morton; grandchildren, Zeus Blankenship, Colette & George Garofalis, Cassie & Phi Lam, Mike & Kea Kokorelis, Diane & Bobby Pearce, Ashton & Mark Ashe, and Taylor Georgalas; and ten great grandchildren.
A Trisagion will be held Tuesday, May 28th at 6:00pm at Saints Constantine and Helen Greek Orthodox Church. A funeral service will be held Wednesday, May 29th at 11:00am with burial immediately following at Peninsula Memorial Park in Newport News.
Arrangements by Amory Funeral Home, Grafton.