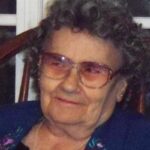 Yorktown, Va. – Mary Fox Kornhaus, 91, passed away on Thursday September 10, 2020. Mary was a native of Chattanooga Tennessee and a peninsula resident since the early 50’s. She grew up working in her father restaurant, later becoming a switch board operator with the Telephone Company and worked at the former York Drive-In Theater.
Ms Mary as many called her had a smile that would light up any room and a heart of gold. She lived for her children and grandchildren and enjoyed her Wednesday night bible study.
She was a member of the Seaford Church of Christ. Mary enjoyed cooking, eaten and listening to country music.
She was preceded in death by her first husband Irvin Freeman Fox, Sr., a son Irvin Freeman Fox Jr. and former husband Franklin Melvin Kornhaus. She is survived by her children, Shane Hogge (Jimmy), Yvonne Holcomb, Crystal Kodl (Bill), Allen Donald Fox and Mark Steppen Fox (Heather) and numerous grandchildren and great-grandchildren.
The family will receive friends on Wednesday from 6:00 to 8:00 PM in Amory Funeral Home. A funeral service will be held at 2:00 PM on Thursday in Amory Funeral Home Chapel. Burial will follow in Peninsula Memorial Park.
Memorials may be made to St. Jude Children’s Research Hospital, 501 St Jude Place, Memphis, TN. 38105-9959.