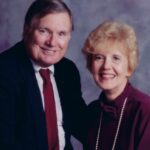 Yorktown, Va. – Marianne Fulton Johnson departed this life on November 25, 2020 in Yorktown, Virginia. She was born May 1936 at Mossy Creek, VA. Raised mostly in Pennsylvania she returned to Virginia to attend nursing school at Riverside Hospital in Newport News. She met the love of her life while riding the ferry to Norfolk where she and Edward T. Johnson attended classes at The College of William and Mary, V.P.I. Norfolk (future Old Dominion University). They continued dating while he got his engineering degree at V.P.I. (Virginia Tech) and she attended Mary Baldwin College in Staunton, VA. They were married June 14, 1958 and moved to Hartford, Connecticut where Ed worked as an engineer and she as a nurse until the birth of her first daughter. After the birth of their second daughter they moved to Florida then to Newport News, VA. After raising her daughters she returned to nursing at Riverside Hospital and retired from Riverside Family Medicine.
She had a lifetime love of nature, music, the arts, and animals which she shared with her daughters and husband. She was preceded in death by her loving husband of 40 years, Edward T. Johnson, her parents Rev. Charles and Mrs. Esther Fulton, her brothers Charlie Fulton and David Fulton and her youngest daughter Jennifer (Jenny) Johnson Anby.
She is survived by her brothers John Fulton and his wife Mary, and William (Bill) Fulton and her sister-in-law Donna Fulton. She is also survived by her loving daughter Elizabeth (Beth) Vrooman and loving nieces Vernie Johnson and Jackie Johnson.
A graveside service will be held at Grace Episcopal Church, Yorktown, VA on Friday, December 4, 2020 at 2:00 PM. In lieu of flowers her wishes are that donations be given to Grace Episcopal Church and/or Blue Ridge Border Collie Rescue (BRBCR.org). Arrangements by Amory Funeral Home, Grafton, Va.