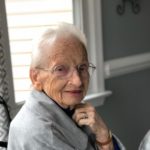 Yorktown, Va. – Margarete Marianne Kelly passed away peacefully with family at her side on July 9, 2019 in Yorktown, VA. Margarete was born on December 11, 1929 in Nuremburg, Germany. She came to the United States in 1959 after marrying the love of her life, Lt. Col., Ret. John Edward Kelly.
Margarete was preceded in death by her mother Kunigunde Birle and father Franz Sales Birle and her two daughters, Petra Karin Kelly and Grace Patricia Kelly.
She is survived by her loving husband of over 60 years, John; her son John Lee Kelly and wife Wendy Ray Kelly; two grandchildren, Trevor Allen Kelly and Tiffany Ray Kelly and her sister-in-law Patsy Lee McCutcheon.
Margarete was very involved with the Grace P. Kelly Foundation for Cancer Research in Germany. Petra, who was the co-founder of the Green Pary in Germany and voted one of the 50 most famous people to ever live, started this foundation in her sister’s memory. It lives on today and her wishes are that any memorial donations be made to cancer research of your choice in Margaret’s name.
Margarete will be buried at Arlington National Cemetery at a later date. Her love and giving heart will be truly missed.
Arrangements by Amory Funeral Home, Grafton.