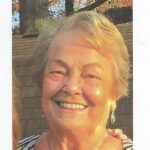 Newport News, Va. – Margareta M. Darby, 87, of Newport News VA, went home to be with the Lord on, Saturday May 14, 2022 at the family residence, surrounded by her family, after a courageous battle with three types of cancers (AML, MDS, DLBCL,)
She was born February 20, 1935 to Walter and Margareta Zugmann in Munich, Germany.
She was known by her friends and acquaintance as a very gentle and loving person, always giving, never complaining and always thinking positive. She specially enjoyed the time spend with her friends
at the Weekly Breakfast Club. She also was a member of Liberty Baptist Church Hampton and enjoy the companionship of all her friends in Jim Morris class.
Margareta meet her future husband in a military snack bar in Schleissheim Germany, in1957. She couldn’t speak English and he couldn’t speak German, they communicated using an English/Germany dictionary. She also vowed not to marry an American. In spite of this, a year and a half later, Margareta Zugmann and SP-4 Ronald Darby (Army) was married on November 7, 1958 in Dachau Germany.
Margareta was a very loving wife (Hausfrau). Mother, and “Grammy”. She was preceded in death by her father and mother, Walter and Margareta Zugmann, Sister Uti Zugmann and Brother Walter Zugmann. She is survived by her loving husband of 64 % yrs. Ron and a daughter, Tina Rogerson (Mark) of Poquoson, two sons, Erick (Kathy) and Mark (Christina) Darby of Newport News, four
grandchildren, Melissa Rogerson and Deanna Uttley of Poquoson, Zachary and Stephen Darby of Newport News VA, and two Great grandchildren Riley Davis and Wesley Uttley, and two sisters Elke
Burgener and Irmgard Muller of Germany.
Funeral services will be held at Amory Funeral Home Chapel on Thursday May 26, 2022 at 11:00 am and Visitation one hour before the funeral. Interment will be 2:00 PM in Albert G. Horton, Jr. Veterans Cemetery. Special thanks to Sentara Hspital, Sentara Hospice and Virginia Oncology Associates for their compassionate care. In lieu of flowers, the family requests donations to Liberty Baptist Church, Peninsula Rescue Mission, The American Cancer Society, or Charity of your choice.