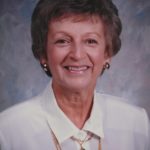 Margaret Mixson Cramer (Freeman), 91, passed away on Friday, May 17, 2019.
Margaret was a native of Hampton, Virginia and a lifelong peninsula resident. She graduated from Hampton High School in 1944 and Randolph Macon College in 1948 with a degree in Mathematics. She was employed at NACA (NASA) until 1955. After raising her family Margaret went back to school and received a teaching degree from CNU and W&M. She taught Math for York County School division (Tabb High School) and then Newport News Public Schools (Hines Middle School) until she retired in the 1990’s. She wrote a weekly column for York Town Crier titled “Freemania” in the early 1980’s and received Awards from Virginia Press Association – Certificate of Merit 1982 (2nd Place) and 1984 (3rd place).
Margaret was preceded in death by her first husband Robert S Freeman and is survived by her children Susan Kappel (Nick), Ellen Matthews (George) and Robert Freeman. She was also preceded in death by her second husband Ross Cramer.
A funeral service will be held at 11:00 AM on Monday, May 20, 2019 in the chapel of Amory Funeral Home, Grafton with Rev. David Magruder, officiating. The family will receive friends one prior to the service starting at 10:00 AM. Burial will be private in Parklawn Memorial Park.
In lieu of flowers donation maybe made to the Alzheimer’s Association National Capital Area Chapter 8180 Greensboro Drive, Suite 400 McLean, VA 22102. Local arrangements by Amory Funeral Home, Grafton, VA.