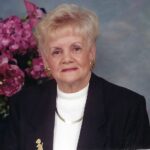 Newport News, Va. – Margaret H. Warren (aka Maggie or Granny) passed peacefully into eternal rest on Saturday, June 20, 2020. She was born on October 18, 1929 in Norfolk, VA and was preceded in death by her parents, Frank M. and Julia V. Hackney, as well as her cherished brother, Frank M. (Buddy) Hackney, Jr.
Margaret is survived by her son, James E. Warren, granddaughters Margaret (her namesake) L. Warren, Jennifer W. Sadler (Rob), great-grandchildren Benjamin, Noah, & Lily Sadler, sister-in-law Pat Hackney, nephews Frank M. Hackney, III (Connie) and Jerry Hackney (Kate), numerous great and great-great nieces and nephews, and very special “daughter”, Susan Harris.
Margaret was a proud Maury Commodore and moved with her family from Norfolk to Newport News, VA in 1958. She worked at NASA from 1958-1962, where she was in daily contact with the original Mercury 7 astronauts. She then switched her career to banking, which lasted for 38 years until her retirement in 2000. She was the epitome of a “people person”, which can be attested to by all of her working colleagues over the years. There are also old “running buddies” who can vouch for her standing as a fun-loving free spirit who literally never had a bad day.
Margaret was an active member of First United Methodist Church, Newport News, VA from 1962 until her battle with dementia precluded her attendance. Even though she was fun-loving and gregarious, she was a devout Christian who took her faith very seriously.
The last 5 years of Margaret’s life were spent as a resident of The Mennowood in Newport News, VA, and her family will be eternally grateful for the amazing care she received there.
Due to the COVID-19 restrictions currently in place, no memorial service will be held at this time. A celebration of Margaret’s life will be held at a later date. The burial will be private.
Any expressions of remembrance may be directed to the Peninsula SPCA in Newport News, VA. Arrangements by Amory Funeral Home, Grafton, Va.