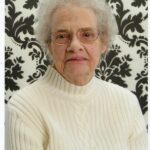 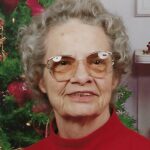 Gloucester, Va – Lula Insley, departed her earthly body to be with her Lord on January 18, 2020 from Riverside Convalescent Center, West Point, VA. Lula Blankenship Justice Insley was born August 14, 1928, to Ray and Lillie Blankenship one of 12 children; she was born and raised, in McDowell County, WV. Preceding her were her parents; Husbands, Earl Justice and Vaden Lorenza Insley; and Step-Son David Justice, three brothers and seven sisters. Surviving are Daughter Brenda Feiner (Marty) of Gloucester, Step-Son Pete Justice (Pat) of (TN), Step- Daughter Jackie Insley Holloway (Poquoson), Remaining to remember their Nana are Two Grandsons; Noel Scott Maddow (Fiona) (WV), William Shannon Maddow (Debbie) of Hampton, . Four Great-Granddaughters Evonne, Marina, Emily and Melody Maddow of (WV) and Two Great-Grandsons Brandan and Logan Maddow of Hampton Four Step-Grandchildren, five step-great grandchildren, and four step-great greatgrandchildren. . Her last remaining sibling is Sister Grathel Faw of Ohio. Sister in Law Enda Barr of Poquoson, as well as a host of nieces and nephews Lula had lived with Brenda and Marty for 21 years at their Gloucester home, until she had to move to the Convalescent center. She was a 21-year member of Calvary Baptist Church Gloucester at the time of her death. She was previously a member of Bible Baptist Church Poquoson, and Maranatha Baptist Church York County. Maida Development Company had employed her many years ago. Lula and Husband Lorenza owned and operated Insley’s Grocery in Poquoson for many years. Lula had been a member of Hampton Fraternal Order of Police Lodge # 26 Auxiliary for many years, and enjoyed Friday night dinner at the Lodge for years. Visitation for friends and family will be at Amory Funeral Home Grafton, VA on Tuesday January 21, 2020 from 6:00 to 7:00pm. The Funeral service will be at in the chapel of Amory Funeral Home Wednesday the 22 at 12 PM. Burial will be at Hampton Memorial Garden 155 Butler Farm RD Hampton, VA. Lula’s Preacher Ralph Vannest will be the officiant. Following the burial, there will be a reception at Calvary Baptist Church 4506 George Washington Memorial HWY, Hayes, VA. for Lula’s family and friends. If you wish memorial contributions in Lula’s honor; instead of flowers any gift may be made to your favorite charity or Hampton Fraternal Order of Police Lodge #26, PO Box 7017 Hampton, VA 23666-0017.Thank you for all your visits calls and prayers during Lula’s illness. Your kindness and consideration shall always be cherished. This extends to the staff and residents of Riverside Convalescent Center and Riverside Hospice. The care and Love you showed Lula and the family has not gone unnoticed or unappreciated. Your consideration helped to ease the pain of Lula’s passing. “A person might not always remember what a person said; they always will remember how they made the person feel.”