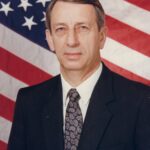 Larry Charles Hanson of Yorktown, VA, passed on June 18,2021, of dementia at Consulate Health Care of Williamsburg.
He was a Veteran’s Day baby being born on November 11, 1939, in Moline, IL. He was born to Clarence Oscar Hanson, a WWI veteran, and Bertha Helen Griggs, and he was the younger sibling of twins Albert Hanson and Helen Shepherd.
He graduated from Rock Island High School in 1957. Larry graduated from Augustana College with a BA in accounting in 1961.
Larry married the love of his life Sally Murrison on November 11, 1961, a day that his wife was confident he wouldn’t forget. He worked for the Rock Island Arsenal after graduating from Augie. He was selected by the United States Army to attend Syracuse University where he received his master’s degree in business administration and graduated at the top of his class.
After accepting the ADCSRM, Assistant Deputy Chief of Staff for Resource Management, position, he moved to Fort Amador, Panama, in 1974 with his family and lived there five years. The next tour was with the Corps of Engineers at Mount Weather, V A, as ADCSRM. Larry was then selected as the comptroller in Riyadh, Saudi Arabia. After almost two years in Saudi, he was selected to be the ADCSRM at Fort Monroe, VA, and was promoted to SES, Senior Executive Service, where he worked for five years. The last position before retirement was as ADCSRM in Heidelberg, Germany, for five years. Altogether, Larry worked for over 30 years for the Army.
Sports played an important part in Larry’s life. He played basketball and baseball in high school and college and dabbled in those sports thereafter. When stationed in Panama, Larry’s softball team played against The King and His Court, a famous touring team led by Eddie Feigner. Feigner commented that Larry was one of the best fast pitch pitchers he’d encountered. Larry also enjoyed playing tennis and bowling.
Larry was an avid car collector, and both he and his wife were members of the Classic Cruisers Car Club in Newport News for which he served as president and then treasurer for many years. Larry obtained his dream car, a 1950 Mercury, when stationed in Panama.
He was also the proud owner of a 1965 Mustang, 1963 Mayberry police car, and a replica 1930 Jaguar. He considered it an honor to be a part of the Classic Cruisers Car Club that raises money for various charities.
Larry is preceded in death by his parents, brother, and sister.
He is survived by his wife of nearly 60 years this November; Sally Hanson; children Holly Mansueti, Matthew Hanson, and Heidi Freeman; grandchildren Hunter Hidrobo, Elizabeth Hidrobo, and twins Corinne and Natalie Hidrobo.
There will be a Celebration of Life on Wednesday, July 7, at 1 PM, at Amory Funeral Home, 410 Grafton, VA. He will be laid to rest at Peninsula Memorial Park. Memorial donations can be sent to Alzheimer’s Association, National Capital Area Chapter (alz.org)