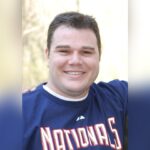 Jonathan Hamilton White, 43, of Lothian, MD passed away peacefully in his sleep from natural causes on March 25, 2022. Jon was born on August 26, 1978 in Hartford, CT and grew up in Fairfax, VA where he graduated from Fairfax High School. He earned his B.S. in Finance from Virginia Tech and later a Masters of Business Administration from Averett University. He enjoyed a 17-year career with the Federal Government across the General Services Administration, NASA Langley Research Center and NASA Goddard Space Flight Center.
Jonathan is survived by Breslin Krebs White, sons William “Will” Hamilton White (13) and Charles “Cal” Breslin White (12), his mother Patricia Hamilton White of Fairfax, VA, sister Rebecca Hamilton Mora and husband Guillermo Mora of Severna Park, MD, and nieces Annabelle and Emilia “Emmy” Mora. He was preceded in death by his father, Robert Montague White.
Jon’s hobbies included reading, watching action movies, and spending time with his family and friends. You could always count on Jon for a boisterous and sincere “Heeeeyyyyy!” greeting and a big hug when he saw you. He was an avid sports fan and rooted for the Nationals, suffered through many years with the Redskins, loved all things Virginia Tech, and especially loved cheering on his son, Will, and the SCYA Bulldogs sports teams. Jon studied abroad during college in Switzerland, China, and Viet Nam and later traveled to Spain, Greece, Ireland and some more relaxing trips to the Caribbean. His favorite thing to do was to spend time with Will & Cal. They enjoyed going to the movies, out for dinner and treats, playing chess and video games. He also looked forward to hosting the annual “Hamilton Cousins Weekend” and “There Will Be Crabs” parties, as well as golfing with his buddies and hunting with his sons and in-laws.
A funeral service will be held at Christ Church West River (220 Owensville Rd. West River, MD) on Saturday, April 2, 2022 at 1:00 pm. The service will also be live streamed via Zoom. The family will receive guests at a reception at the Parish Hall following the service. In lieu of flowers, donations may be sent to Christ Church in Jon’s memory. Any funds received will support construction of the church’s planned memorial garden, which will be Jon’s final resting place. Please use the following address for donations: P.O. Box 531 Shady Side, MD 20764.
Zoom Link for Saturday, 1:00 pm service: https://myemail.constantcontact.com/In-Loving-Memory.html?soid=1133733276680&aid=KfSRk-aSclU