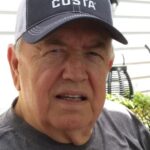 John Malcolm Ashley, Sr, age 82, of Seaford, passed away on Tuesday, June 7, 2022. He was proceeded in death by his parents Henry Carter Ashley and Viola Deane (Johnson) Ashley and sister, Alice Joan Jennings. John was born November 27, 1939 in Glade Springs, Virginia and grew up in Pulaski, Virginia. He attended Pulaski High School and was a standout fullback for the Orioles football teams from 1955-1957 earning All-Southwest honors. John moved to the Hampton Roads area in 1960 and began a career at the Newport News Shipyard which spanned nearly 30 years. Following retirement, he found great pleasure in following his grandchildren’s athletic endeavors.
John is survived by his wife of 55 years, Marie Phibbs Ashley; son, John Malcolm Ashley, Jr. (Beverly); two grandchildren, Brent C. Ashley and Blake T. Ashley. He is also survived by a brother, Kenneth C. Ashley (Patsy); sister, Carroll Ashley Wimmer and several nieces and nephews.
The family would like to thank all of the first responders from the York County Fire and Life Safety stations as well as the staff from the York Nursing and Rehabilitation Center. In lieu of flowers, donations may be made to the York County Fire and Life Safety, 301 Goodwin Neck Rd, Yorktown, VA 23692.
A visitation will be held on Saturday, June 11 from 6-7pm at Amory Funeral Home in Grafton. A funeral service will be held Sunday, June 12 at 3pm at Zion United Methodist Church in Seaford. The interment will follow in the church cemetery.