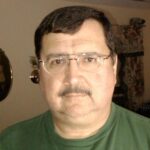 John Bernardo, age 64, formerly of Plymouth and now of Yorktown, VA, passed away from heart conditions on November 5, 2020. He was the son of Joseph Bernardo and Anna (DiSalvatore) Bernardo. He was raised in a very Italian neighborhood with his father’s parents living in the same house and his mother’s parents a few houses away. He is survived by the two shining lights of his life, his sons, Christopher and Stephen, both of Yorktown Virginia, and several cousins. John graduated from Plymouth-Carver High School in 1974, where he was an active member of the marching band which included marching in the Tournament of Roses Parade in 1971 and the Orange Bowl Parade in 1972. He went on to graduate from the pharmacy school of Northeastern University in Boston. He worked at several local hospitals in Massachusetts before moving to Virginia and continued to practice his profession there. He was employed by the Hampton Veterans Administration Medical Center at the time of his passing. He was a diehard Boston Sports Fan who was able to see the Red Sox finally win a World Series, a pleasure denied his father during his lifetime. This love of Boston sports was often shared with his fellow diehards, Skip Budge, Dick Corvini, and Phil Walling. He also had a lifelong passion for historical board gaming and was well respected in that community. He will be deeply missed by all who knew him. Services will be held at the convenience of the family.