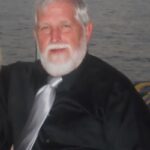 On September 23rd 2021, John H. Hall departed this world to be with his Lord and Savior and awaiting him at his home in glory is the love of his life, his wife of 59 years. John, the oldest of two was preceded in death by his wife Ollie ”Mae” Hall, his parents ,John Lloyd and Elberda Hall as well as his sister, Lois Elaine Foster .Left to cherish his memory are his daughters, Shawnette Hillard (Gary), Annette Frye (Jeff), Deanna Judkins (Kenny), Rebecca Boyd (Doug) and Mary Anne Matern. In addition, he leaves his beloved grandchildren, Ben Hillard (Beth), Zach Frye (Cristina), Nick Hillard (Brittany), K.C. Judkins (Misty), Tiffany Cantrell (Hunter), Adam Sewell, Shelby Glaser (John), Meghan Boyd and Justin Boyd. His grandchildren blessed him with seven great grandchildren, Holden, Bryson, Piper, Jackson, Thea, Camden and J.J. Baby Charlie and Small Frye are also on the way. Not to be left out, his four-legged best friend Teddy will also miss him so very much.
John came from humble beginnings in West Virginia to become an extremely wealthy man. While he was always a good provider for his family, he did not count his wealth in worldly possessions. He measured his wealth by the overabundance of love, respect, honor and appreciation from his daughters. These girls he raised, molded and shaped from his undeniable strength of character and faith in God. He was a man of great integrity and humility as well as a man of few words but great wisdom. When John spoke, you listened. He was always lending a helping hand but never wanted recognition or acknowledgement. He worked tirelessly and selflessly to build a house and a home for his family and never faltered. He sacrificed his own needs often going without just to provide for his family. John was a great man and had few vices… but one was speed… whether it was a fast car, motorcycle, go- cart or even riding his bike, he wanted to get there first. John loved cars, whether they were old classics or a newer Mercedes .He shared this love with his grandkids and they were always excited to go to him for his advice. Another “vice” was his family. There was nothing that John enjoyed more than being at home or on vacation with his family, laughing, playing games and just having fun. A man of great faith, you often heard him say “to be absent from the body is to be present with the Lord”. And while in his worldly body, he was a man of great love. After Mae’s passing this last December, the light went out in his eyes. Although he tried, he couldn’t find a purpose for continuing in this world. To possess that much love for someone is so beautiful and a testament to what true love really means. They are now reunited and happy once again. He has kissed her once again and is holding her hand as they walk the streets of gold in glory. The family will receive friends Wednesday, September 29th, 2021 at 10am at Coastal Church in Yorktown. The service celebrating John’s life will begin at 11am followed by a graveside service. The Family would like to thank the staff of The Newport, The Huntington and Riverside 5 East for the compassionate care provided to John during his stay. In lieu of flowers, donations can be made to Coastal Church. Arrangements by Amory Funeral Home, Grafton, VA.