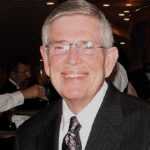 Yorktown, Va. – Jack Judson Hatfield went to be with the Lord on September 27, 2020 after a short illness. He was a resident of the peninsula for 60 years. Jack, 82, was born in Shenandoah, VA, where he met his future wife Gwen in the third grade. They were married after Jack completed his first year of college at VMI. He continued his education at The University of Virginia in Charlottesville while Gwen worked to support them both. He received a Bachelor of Engineering degree from UVA in 1960.
After graduating from UVA, he was employed at NASA Langley Research Center as a 2nd Lieutenant in the USAF until 1963. In 1963, he converted to a NASA civilian employee and conducted research on electronic flight display systems and crew station interface for aeronautical and space vehicles. Jack collaborated on flight display concepts such as “pathway in the sky”, “synthetic vision”, and flat panel display technologies which are in use in military and civilian aircraft today. Later in his career, he was head of the Crew/Vehicle Interface Research Branch. He retired from NASA in 1995 after 35 years of service, and became a consultant for Honeywell to research “synthetic vision” for supersonic transports. He also worked for Avaya where he designed AV systems for the Newport News Shipyard VASCIC and the downtown Engineering Building.
Jack enjoyed spending time with family, reading, woodworking, home remodeling, photography, home computers and singing in the church choir. He was a member of Calvary Reformed Presbyterian Church and loved the Lord Jesus Christ as his Savior and Redeemer.
He was preceded in death by his parents; Hilda Foley Hatfield and Dr. James E. Hatfield; his stepmother, Myrtle Breeden Hatfield; two brothers, Douglas H. Hatfield and Joseph P. Hatfield; and a sister, Maxine Hatfield Van Hyning. He is survived by his wife of 63 years, Gwendolyn Burrill Hatfield; a daughter, Susan Howland and her husband Greg Howland of Yorktown, VA; a grandson, John Hatfield Howland and his wife Erin Howland, of Yorktown, VA; a granddaughter Melissa Miller and her husband Micah Miller, of Poquoson, VA, and three great-grandchildren.
A memorial service will be held at Calvary Reformed Presbyterian Church, 403 Whealton Rd., Hampton, VA 23666 on Saturday October 3rd, 2020 at 1:00 p.m. A reception will be at the church after the service. In lieu of flowers, donations may be made to the Calvary Reformed Presbyterian Church Operations or Building Fund, 403 Whealton Rd., Hampton, VA 23666.
Arrangements by Amory Funeral Home, Grafton, VA.