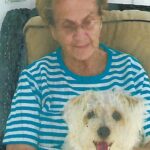 Yorktown – Grace Porrello, 88, passed away on Tuesday, December 15, 2020. Grace was a native of Woodside, New York and a former resident of Charlottesville for 32 years before moving to Yorktown in 2013. She was a former School Teacher in Bronx, New York Public Schools and worked with a Drug and Alcohol Rehabilitation Center. She is survived by her children Charles A. Freda, III (Melinda) of Seattle Washington, Julie Freda of Palmyra, VA and Lori Freda, (John) of Yorktown, Va. 9 grandchildren, Ariel, Eitan, Benjamin, Jarrid, Arianna, Anthony, Joseph, Stephanie and Jaclyn.
The family will receive friends on Thursday from 5 to 7 PM at Amory Funeral Home, Grafton. A funeral mass will be celebrated on Friday December 18, 2020 at 11:00 AM in St Joan of Arc Catholic Church, Yorktown. The family will receive friends one hour prior to the mass.
Memorials may be made to the Alzheimer’s Association Williamsburg Branch Office, 213 McLaws Circle, Suite 2-B, Williamsburg, VA 23185