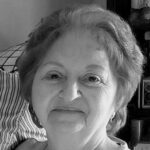 Gloria J. (Mantz) Ackerman, 81, of Yorktown, Virginia, formerly of Jim Thorpe, passed away Monday, September 26th, with her family by her side. Gloria was born in Coaldale on October 2, 1940, a daughter of the late Marvin and Rachel (Swank) Mantz. Until her retirement, she was a Cafeteria Aide and Bus Monitor for the Jim Thorpe Area School District at the L.B Morris Elementary School She celebrated her 61st wedding anniversary with the love of her life, her husband, Kenneth Ackerman on August, 19th. In addition to her husband, Gloria is survived by two children, daughter Jodi Andrews, wife of Jeffery Andrews of York- town, Virginia and Kenneth Ackerman Jr. and his wife Theresa Ackerman of Fairview Heights, Illinois. Gloria is also survived by four grandchildren, Tiffany Komoromi and her husband ZakKomoromi, and great-granddaughter Evelyn of Edwardsville, Illinois. Victoria Ackerman of Fairview Heights, Illinois. Tyler Andrews and wife Caitlin Andrews of Yorktown, Virginia. Zachary Andrews and fiancé Hanna Mason of Yorktown, Virginia. She was preceded in death by her sisters, Sandra Solt, formerly of Lansford and Diane Melber, of Jim Thorpe. She was a former member of Grace St Paul’s United Methodist Church in Jim Thorpe. Service: A memorial service officiated by the Reverend Kenneth Melber, will be held in her honor on November 10th at Skyview Memorial Park, Hometown.