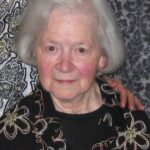 Frances Martha Matthews White, age 94, passed into heaven Wednesday September 9th, 2020. “Frankie” as she was known to her family and friends was born in Stapleton, Georgia in 1926. She came from a sharecropping family in Georgia, then her father got a job at the Newport News shipyard and he moved the family to Virginia.
She worked as a hat check girl at Skateland on Jefferson Ave in Newport News while she was in school, there she met her future husband Bill White.
She graduated from Morrison High School in 1944 (which was later renamed Warwick High School).
She and Bill dated before & after he returned from World War II, and they married in 1946.
They moved to Lynchburg where she worked in a bank while Bill attended the Medical College of Virginia to become a pharmacist. Once he finished school, they returned to Newport News and she worked at the Bank of Warwick while he worked at Hilton Pharmacy. In Newport News, they bought a house in Hilton, and in 1953 their 1st daughter Karen was born, then in 1956 their 2nd daughter Donna was born. In 1963, they moved to a new house in Denbigh, and that house remained the family home.
Frankie was a loving, kind, and compassionate wife, mother, grandmother, great grandmother, sister, and friend. She was a faithful member of Menchville Baptist church until her illness progressed in 1995.
Frankie is preceded in death by her husband William F. White, Jr and her brothers James L. Matthews, and Clifford T Matthews.
She is survived by her sister Jean Hayes of Hampton, two daughters Karen White Ziegler of Newport News, and Donna L. Beasley and her husband, Keith, of Yorktown; her granddaughter Sabrina L. Fortune and her husband, T Fortune, of Virginia Beach, with her great granddaughters Zoe and Harper Fortune; plus numerous nephews, nieces, cousins and friends.
A funeral service will be held at 2:00 PM on Tuesday, September 15, 2020 in Amory Funeral Home Chapel with Rev. Jim Weston. Burial will follow in Peninsula Memorial Park. Due to Covid-19 restrictions All guests are required to wear a mask and maintain social distancing.
In lieu of flowers, memorial donations may be made to Thrive Peninsula (feeding the homeless) or the Michael J. Fox Parkinson’s Foundation.
Thank you to the heroes of Riverside Gardens at Warwick Forest that worked tirelessly during the pandemic caring for our mother…and a special thank you to Andrea Epps, social worker at the Gardens, and Melanie Barone, RN with Riverside Hospice.