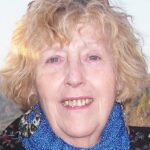 Esther Mae (Frew) Sundelin died at home in Yorktown, VA on January 12, 2023. She was born May 18, 1937 in McKeesport, PA to Emma Florella (Crocker) and Edwin Meredith Frew.She is survived by her husband of 55 years, Ronald M. Sundelin, her daughter Beth (Jonathan) Williams, her son John (Ellie) Sundelin, her grandsons, Eric S. Williams and Grant F. Williams, and a niece, Rebecca (Perry) Russel, as well as several great-nieces and great-great-nieces and nephews.She was predeceased by both her parents, her stepmother Hannah (Georgi) Frew, her brother John W. Griffin, her sister Kathryn J. Griffin, and her nephew John E. Griffin.She graduated from East McKeesport High School, McKeesport Hospital School of Nursing (RN), Duquesne University (BS), and Hampton University (MS). She worked as a Nurse and Nurse Supervisor at McKeesport Hospital. She was a Rehab Nurse for Riverside Health System and a Nurse Educator at both McKeesport Hospital and Hampton University. She was the Conference Coordinator for the 1983 International Symposium on Lepton and Photon Interactions at High Energies.In addition to raising two children, she was an active volunteer in both her church and the local community. She enjoyed bridge, book group, and Home Dem. She also enjoyed travelling and visited all 50 states and 24 countries. A Memorial Service will be held on January 21, 2023 at 4 pm at Yorkminster Presbyterian Church in Grafton where she was a member for nearly 35 years. The service will be live-streamed at yorkminsterpc.org. She will be interred in Green Hills Cemetery in Dryden, NY at a later date. In lieu of flowers, donations may be made to the American Lung Association, the American Cancer Society, or An Achievable Dream in Newport News. Arrangements are being handled by Amory Funeral Home, Grafton.