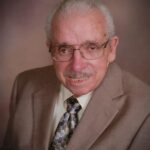 ERNEST GLENN MOESER, 88, of Newport News, VA died Wednesday, October 7, 2020, of natural causes after a brief illness. Ernie was born in Zelienople, Pennsylvania November 22, 1931, son of Ernest Gottlieb Moeser and Lillian (McMurdo) Moeser. He is survived by Doris (Fash) Moeser, his wife of 66 years, two sons, Mark Moeser (wife Lisa), of Lancaster County, PA and Carl Moeser (partner Michael Gambelli), of Newport News, and three grand-daughters Heather, Dara (husband Paul Obeldobel) and Rachel. He is also survived by sisters Shirley Denny and Lillian Thomas, and her husband Richard Thomas, as well as many nieces, nephews and their families.
A graduate of Zelienople High School, he took business and personal development courses at Butler County Community College, Beaver County Community College, University of Pittsburgh and Duquesne. Ernie was employed as a machinist for Herman Corporation, having been apprenticed to his father and grand-father, before becoming the firm’s purchasing agent and buyer for a $33 million project for the then Soviet Union. He was a long time member of the Zelienople Volunteer Fire Department starting in 1960, becoming a Captain of that organization. Relocating to Newport News in 1983, he worked in purchasing for Siemens Automotive, now Continental. Following corporate retirement, he worked for many years in the shops in the Banbury Cross section of Busch Gardens.
Ernie loved learning about World War2 and touring airplane and other museums, a tribute to his brother who trained on P-47 Thunderbolts. He and Doris loved to travel and they visited 49 of the 50 states, several Canadian Provinces, and Great Britain.
A service will be held at Amory Funeral Home in Yorktown, Saturday October 7th, before cremation and internment in Zelienople. Donations can be made to English Lutheran Church, Zelienople.