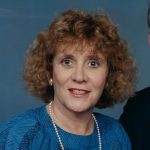 Dora Jean “DJ” (Mayer) Doyon, a lifelong Peninsula resident, passed away on Sunday, February 10, 2019 at her residence at the Chesapeake retirement community in Newport News. She was 86 years old.
DJ was born on October 30, 1932 in Newport News to James and Kathryn Mayer and raised with sister Joan (McLaughlin) who passed in 1993. She was preceded in death by her beloved husband Leonard “Leo” Doyon in December 2015. She is survived by her son Jim Doyon and his wife Teri, Son John Doyon, son Jeff Doyon and his wife Ann, step-son Tom Doyon and his wife Wessi, and step-daughter Rose-Marie (Doyon) Trust and her husband Egon, along with 7 grandchildren and 4 great-grandchildren.
DJ was a lifelong member of Northside Christian Church, going all the way back to when it was the 24th Street Church of Christ. She graduated from Newport News High School in 1951 and had friends all over the Peninsula. She met Leo when they both worked at the Transportation School at Fort Eustis, she as a secretary and he as a young army officer. After a number of years in Arlington when Leo worked at the Pentagon, she moved with Leo and the family to Seaford in 1971 and continued to live in York County until 2016.
DJ was known for sharing funny stories and always making people laugh. She loved music and had the uncanny ability to remember lyrics to old songs, enjoyed playing piano, always read the newspaper front-to-back, liked watching Jeopardy! and — back in the day — was a pretty good pinochle player.
A memorial service will be held at 2:00 p.m. on Saturday, February 16, 2019 at Amory Funeral Home in Yorktown, VA with a family reception to follow. DJ will be laid to rest with her husband in Arlington National Cemetery at a later date.
In lieu of flowers the family would appreciate donations be made to Remember the Children (www.remember-the-children.org).