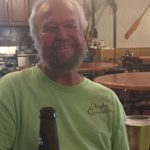 Dandy, VA – Dale K. “Honker” Williams, 68, entered into eternal rest on Tuesday, Feb. 26, 2019. Dale was a life-long peninsula resident of York County and Poquoson. He was fortunate to spend the last several years in his childhood home of Dandy enjoying life on the water with his wife, Ilona, and surrounded by family and friends.
Dale spent over 30 years in construction and carpentry. The majority of his career was with his self-owned construction company. He was a skilled carpenter in trim and stairway work. However, his true love was being on the water fishing, crabbing, and clamming. Dale was an avid waterman and also loved working in his garden. He was always sharing his crops and seafood with others. In his retirement years, he enjoyed spending time with friends and having at beer at one of his favorite Poquoson establishments Surfs Up and Mr. C’s.
Dale was preceded in death by his parents, Raymond and Marion Williams. He is survived by his loving and devoted wife of 45 years, Ilona of Dandy; his daughter, Jennifer Thomas (Todd), and son, Troy Williams all of Poquoson. He is also survived by his four siblings sisters, Wanda Holland of Gloucester, Janet Williams of Newport News, and Vickie Sexton (Paul) of Dandy; and brother Wayne Williams (Robin) of Dandy. Also left to cherish his memory are his grandchildren Austin, Shelby, Jared, Tinley, and Tate whom adored their Grandpa beyond words. Dale also leaves behind many aunts, uncles, cousins, nieces, nephews, and friends who will always be like family.
A service for Dale will be held at 2:00pm on Thursday, February 28 at Amory Funeral Home, Grafton. The family will receive friends at 1pm before the service and other times at the residence of 1108 Dandy Loop Rd. A graveside service will immediately follow at Peninsula Memorial Park.