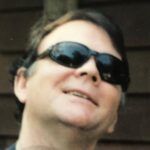 Craig William Wilson, age 65 passed away on August 23, 2021. He was born on January 27, 1956 in Portsmouth, Virginia to Robert William and Barbara Anne Wilson of Yorktown, VA. Craig, fondly referred to as Craig “Wild” Wilson was the middle child of five: 3 brothers and a sister. He was a long time resident of Newport, Rhode Island where he graduated from Rogers High School. In his early 20’s he moved to San Diego, CA to be near his girlfriend Karen Freeman Records. Craig loved CA where he enjoyed surfing, made many friends and had lots of outdoor adventures. In 1980, Craig was in a motorcycle accident and sustained a traumatic brain injury. For the next 32 years, Craig lived in Yorktown, Virginia with his parents who provided him with tremendous love and the best possible care. During that time, Craig was well-loved and taken care of by many family members, friends and neighbors. Craig had a sweet nature and was loved by all those who met him. His smile, flirtatious and warm embraces will be missed. A heartfelt thank you to all his care-givers, who spent many years loving and caring for Craig.
Craig was preceded in death by his father Robert William Wilson, his older brother Clifford Andrew Wilson, his younger brother Curt James Wilson, niece Carrie Lynn Jenni, great-nephew Nicholas Benjamin Jenni, brother- in-law Steven Michael Strunk and sister-in-law Katey HIggins Wilson. He is survived by his mother Barbara Anne Wilson, brother Christopher Robert Wilson, sister Kimberly Wilson Strunk, nieces Julia Lines Wilson, Kelsey Amanda Wilson, Olivia May Strunk, Justin Christopher Wilson, William Lines Wilson, Bryan Douglas Heden, and great-nieces Eve Faith Jenni, Emma Rose Jenni and Clementine Adrestia Heden.
There will be a Celebration of Craig’s life on Thursday, August 26, 2021 at 12 o’clock at Amory Funeral Home, 410 Grafton Dr., Yorktown, VA 23692.