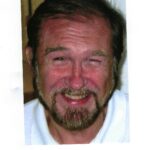 Yorktown, VA – Chris Gross passed away on August 25th, 2021, at age 83. Chris will be forever remembered by those who knew him for his warm sense of humor, his intellectual curiosity, his passion for his work, and his devotion to family and friends. He is survived by his beloved wife of fifty-nine years, Katie Faith Woodcock Gross; his daughter, Alice Faith Gross Cook (Randolph); his grandchildren, Madeline Faith Cook and Cameron Louis Cook; and several nieces, nephews and cousins. He was predeceased by his parents and his siblings.
Chris was born in Charlotte, NC in 1937 to Gus George Gross and Josephine Elish Gross. He was the third of four siblings and spent his formative years in Wilmington, NC, where he attended New Hanover High School. He graduated from North Carolina State University in 1962 with an undergraduate degree in Nuclear Engineering.
After earning his engineering degree, NASA’s Langley Research Center recruited Chris as a researcher. There, he was a valued employee, receiving many awards, commendations, and patents. He loved his work at NASA and especially valued the friendships he developed with his colleagues. This work gave him the opportunity to mentor students, many of whom became lifelong friends. During his tenure at NASA, Chris received a Master’s in Physics from the College of William and Mary.
In 1979, Chris left NASA to become a founding partner of Pressure Systems Inc. This enabled him to manufacture commercial instrumentation based on his NASA inventions and patents.
In 1989, Chris sold his interest in PSI and enjoyed six years of retirement before joining Measurement Specialties, Inc. in 1995, where he shared his talents until 2010.
Chris had a lifelong love for the beach, especially Wrightsville Beach, NC — his favorite vacation spot, where a cold beverage in his hand and Motown music made every day extraordinary. Chris valued the life-long friends he nurtured from high school and college and enjoyed meeting them during vacations in NC. One of Chris’s favorite past times was to regale folks with stories of his incredible adventures, including riding his bicycle into the winds of Hurricane Hazel in 1954.
Chris loved his community and participated in many neighborhood recreational activities. He enjoyed the rich character of both Yorktown and Colonial Williamsburg and supported preserving the history of those special places. He was especially proud of being a member of the American Friends of Lafayette. Chris designed his home as an homage to the Wythe House in Colonial Williamsburg and spent many hours cultivating his extensive English boxwood gardens that were inspired by the colonial gardens in Williamsburg.

Chris loved to travel and was fortunate to make many trips abroad to both Europe and China for work and for fun. He and Faith enjoyed many leisure trips together, including sailing to England on the Queen Elizabeth II as well as many trips to their favorite destinations in South America and Australia.
The family would like to thank the staff of Kindred Hospice and the staff from Clare Bridge Memory Care section of the Brookdale Senior Living in Williamsburg, VA, for their kind care of Chris during his last year.
While the last couple of years of Chris’s life were challenging due to his diagnosis of Lewy Body Dementia, he was fortunate to have lived a full, colorful, successful, and exciting life surrounded by good friends and loving family. Chris considered himself incredibly lucky to have had the wonderful existence he enjoyed here on Earth.
The family suggests memorial remembrances be made to the Lewy Body Dementia Association, 912 Killian Hill Road SW, Suite 202C, Atlanta, GA 30047 USA; the Jamestown-Yorktown Foundation, Inc., P.O. Box 3605, Williamsburg, VA. 23187; or the Lackey Free Clinic, 1620 Old Williamsburg Rd, Yorktown, VA 23690.
A celebration of Chris’s life will be announced at a later date.