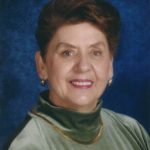 Charlotte Long Paschall, age 82 of Newport News, Virginia, passed away on Monday April 29, 2019.
She was a born in Harrisburg, Pennsylvania to Charles and Teletha Long. She was blessed with a beautiful soprano voice, received a degree in Music from Lebanon Valley College and became a teacher. Charlotte met her husband James at a dance. Jim told his buddy that the woman across the room was going to be his wife. They married on June 11, 1960 and moved to Westover Air Base in Massachusetts. There they welcomed their daughter, Lori in March 1961. Shortly after, they received orders to move to Wiesbaden, Germany. Charlotte, with infant in tow, traveled on the Queen Mary to Europe. In 1964, they were transferred to Maxwell Air Base in Montgomery, Alabama. Charlotte taught piano out of the house and was a soloist at local churches and synagogues. The family was transferred back to Germany in 1970 and they welcomed their second child, Charles in 1972. Charlotte kept up her singing and teaching piano. In 1977 they were transferred to Langley Air Base in Hampton, Virginia. They found a home in Yorktown, Virginia. Charlotte became an Elementary Music Teacher for the York County Public Schools where she worked for over 25 years. She was member of St Mark Lutheran Church and Trinity Lutheran church where she enjoyed singing in the choir and playing bells in the bell choir. She was a member of the Eastern Star Pocahontas Chapter 10. She enjoyed traveling, visiting much of the United States, Europe and Peru, She was an avid reader and loved playing cards with her new friends at the The Chesapeake. Her generous spirit will be missed.
She was preceded in death by her husband James R. Paschall and is survived by her daughter Lori Paschall and her spouse Brenda Bentley of Portland, Oregon and her son Charles Paschall and his wife Nikki Paschall of Richmond, Virginia.
A memorial service will be held at 3PM on Sunday, May 5, 2019 at St Mark Lutheran Church. Inurnment will be at a later in the church columbarium. Memorial may be made to American Cancer Society