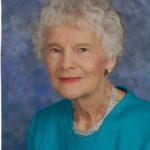 Yorktown, Va. – Carolyn Dail Skinner, 83, passed away peacefully at her home on Saturday June 13, surrounded by her loving family. Carolyn, known affectionately as “Momo Carolyn,” was a proud native of North Carolina and a peninsula resident since 1953. She graduated from Newport News High School in 1954 and retired from the Commonwealth of Virginia after many years of service. She was a faithful member of Bethel Baptist Church for over 50 years. She enjoyed boating and spending time on the water. She was known for her southern cooking, most notably her potato salad and deserts. After retiring, she enjoyed spending time and traveling with her friends and family, especially her grandchildren where she introduced them to life on the “rivah.” Carolyn modeled Christianity in her actions and words and exemplified a life well lived.
She was preceded in death by her husband of 33 years James “Jimmy” Skinner and brothers James T. Dail, Jr. and Rufus K. Dail and a sister Leona Russell. Carolyn is survived by her son Wayne Skinner; son Brian Skinner and his wife Candi and grandchildren Benjamin and Julia. She is also survived by her three sisters, Neola Adams of Centerville, Betty Phillips and her husband Dr. Harvey Phillips of Ashland, and Peggy White of Newport News, as well as many nieces and nephews.
Memorial services will be held at 11:00 a.m. on Friday, June 19th at Bethel Baptist Church in Yorktown. Burial will follow at Peninsula Memorial Park. In lieu of flowers, the family asks that a donation in her honor be made to the Boys and Girls Club of the Virginia Peninsula. Arrangements by Amory Funeral Home, Grafton, VA.