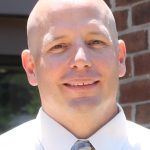 Brian Leonard Utne, 50, passed away on Thursday, October 25, 2018. Brian was a native and lifelong Yorktown resident. He graduated from York High School in 1986, the Newport News Shipbuilding Apprentice School in 1992, TNCC in 2000, and Old Dominion University in 2003. Brian worked for Newport News Shipbuilding as an engineer. He was an avid cyclist and was a member of many cycle clubs as well as a member of the Historic Triangle Bicycle Advisory Committee.
He was preceded in death by his mother Dorothy P. Utne and is survived by his wife Susan Macauley Utne, his children, Elise Utne and Calvin Utne. He is also survived by his father, Bruce S. Utne; a sister, Stephanie Cooker and her husband, John; a brother, Bruce A. Utne and his wife, Jenny; five nieces, two nephews; and a loving golden retriever, Marvin.
A memorial service will be held on Saturday, November 3, 2018 at St. Mark Lutheran Church, 118 Old York-Hampton Hwy., Yorktown, VA at 2:00 p.m. In lieu of flowers, donations can be made to www.virginiacapitaltrail.org