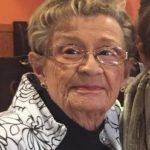 Poquoson, Va. – Beverly Ann Sothcott, 85, passed away on Tuesday, May 21, 2019. Beverly was a native of Michigan and a peninsula resident since 1970. She was a founding member of the Tabb High School Athletic Booster club in the late 70’s. Beverly enjoyed serving and working the concessions stands at the local York County Little League games as well as the Tabb High School sporting events. After her husband’s retirement from the US Army in 1973, they enjoyed traveling. In later years she also worked the concessions at the West Point Airport for the Peninsula Skydivers Club and was an avid Bowler. Along with her sister Victoria, they raised and showed Black Russian Terriers.
She was preceded in death by her husband of 47 years Myron Frederick Sothcott and daughter-in-law Jacqueline Bumgardner-Sothcott. She is survived by her sons, Robert Sothcott of Hampton, David Sothcott of Cocoa Beach, FL, and Victor Sothcott and his wife Janice of Newport News; and a sister Victoria Vest of Huntsville, AL. She is also survived by her grandchildren, Valerie Davis (Mike), Jessamine Swett (Andy), Kristal Poff (Robbie), Mark Bumgardner, Bradley Gibbens (Hope), and Amy Cowley (Andrew); 5 great grandchildren, Landon Davis, Reagan Swett, Preston Swett, Roslyn Poff, and Lucy Poff.
The family will receive friends and family on Thursday, May 23, 2019 in Bethel Chapel. The viewing will start at 1:00 PM, followed by funeral mass at 2:00 PM by Father Robert Bruno. A graveside service will be held at a later date in Mangalit Cemetery, Mabalacat City, Philippines. Please join the family in the reception room following the services. Local arrangements by Amory Funeral Home, Grafton, Virginia.