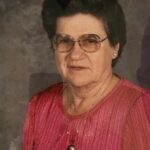 Yorktown, Va. – Bertha Lee Messick Freeman, 95, passed away at home on Saturday, August 1, 2020. Mrs. Freeman was a native of Hampton and graduated from Hampton High School. She was a former resident of Poquoson before moving to York County in 1995.
She was preceded in death by her husband of 74 years Robert Henry Freeman, Sr. and her son Robert Henry Freeman Jr. and is survived by her children, Pauline Conwell of Roanoke Rapids, NC., Eugene Freeman of Poquoson, Harold Freeman of Poquoson and William H. Freeman of Yorktown, VA. 8 grandchildren and numerous great grandchildren.
A graveside service will be held at 11:00 AM on Saturday August 8, 2020 Hampton Memorial Gardens. The family will receive friends on Friday from 6:00 to 7:00 PM In Amory Funeral Home.