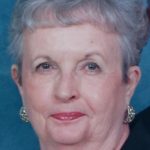 She was born in Newport News, Virginia to Alice and George C. Wilson, Sr. both pre-deceased as well as both sets of her grandparents, Tom and Missy Green and Jeff and Lou Wilson , all of Dare, Virginia.
She is survived by her beloved husband of 69 years Joseph J. Hogge. She was also pre-deceased by her brother, George C. Wilson, Jr. and nephew Doug Wilson. Surviving her are two nieces Connie W. Murray (John) and Ann Wilson (Tony Diaz). Also surviving her is a very special nephew William (Billy) Wilson (Debbie) as well as many cousins.
She was a member of Cornith United Methodist Church of Sandston, Virginia and lifetime member of Providence United Methodist Church which is where she served on the board of trustees until she moved to the Masonic Home of Virginia in Richmond, Virginia in the year 2000. She was a 70 year member of the 0rder of Eastern Star (York County Chapter 110).
She retired in 1985 as the Executive Assistant to the Director of NASA Langley Research Center after 36 ½ years of service. Following her retirement, she was a Mary Kay Consultant for 10 years. She loved the Lord and had a very strong faith in God.
A memorial service will be held at 1:00 PM on Saturday, September 21, 2019 at Providence United Methodist Church.
In lieu of flowers, the family requests that memorial donations be made in her name to Providence United Methodist Church Cemetery Fund, 113 Old Dare Road, Yorktown, Va. 23692. Local arrangements by Amory Funeral Home, Grafton, VA.