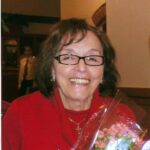 Yorktown, Va. – Anna Koch Cundiff, 89 passed away on Tuesday, September 1, 2020, while a resident of Bayside Poquoson, Virginia. Anna was born in Germany and moved to the United States in 1961. She was a former resident of Newport News, Smithfield and Yorktown, Virginia. She later retired from Newport News Public Schools in 1992, with over 20 years of service.
She was preceded in death by husband Dale O. Cundiff on September 6, 1976, due to complications from Agent Orange and his tours in Vietnam. He retired from the U.S. Army in December 1974. Anna is survived by her daughter, Giesela A. Downey (Angie) and her husband Gary James Downey of Smithfield, Va. sons Franz W. Cundiff (Wolfie) and his wife Barbara A. Cundiff of Smithfield, Va. and Jeffrey Cundiff of Yorktown Virginia, and his fiancée Teresa Commander. Four grandchildren, Brian, Kevin (Hiroko) Kyla (Jeff) and Dale (Brienna). Six great grandchildren, Navia, Ronan, Maiya, Jacob, John and Aleya.
The family will receive friends from 7:00 to 8:30 PM on Friday September 4, 2020 in Amory Funeral Home Grafton Drive Yorktown, Virginia. A funeral service will be held at 12:00 P.M. on Saturday September 5, 2020 in the Funeral Home with interment at Peninsula Memorial Park.