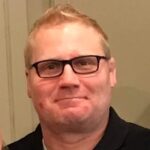 Adam Jason Rose, 51, born August 7, 1970 in Richmond, VA passed away unexpectedly Saturday, September 4 from heart failure. Adam was preceded in death by his mother, Donna Atkinson Youngblood, his father Donnie Melvin Rose, his grandparents Carl and Edna Rose and Sam and Lila Atkinson, his uncles Dannie Rose, Augie Endebrock, Nelson Capps and his cousin Angela Capps. He is survived by his son, Jacob O’Sullivan, his brother and sister-in-law, Sam and Tasha Rose, his “aunt and second mom” Debbie Stembler and uncle Bill Stembler, aunt and uncles Dottie and Ed Grace, Dee and Vince Kidd, Carlton and Mary Rose, aunt Sandra Quinn, and his uncle Tom Barham. He is also survived by many loving cousins, nieces and nephews. Adam was a character in every sense of the word and was always the life of the party. He was quick-witted and had a great sense of humor. At his best, you simply loved being around him and could count on laughter from his very big personality. Adam had a passion for his dogs, Lola and Ed, and also loved photography. For many years, Adam was the owner and operator for Rose’s Lawn Care in Hilton. He developed a reputation as someone who could fix anything. Right now, family and friends could use him to help fix our broken hearts. A Celebration of Life for Adam will be held Friday, September 10 from 4-6pm on the back lawn of the James River Country Club. The family has requested that donations be made to 4 Paws Animal Rescue in lieu of flowers. Arrangements are being made by Amory Funeral Home.